Emulink Migration Consultancies has been around since 2003.  I am Dr Timothy Haines, a Registered Migration Agent (MARA Reg. No. 0301422), with a background in migration, migrant and refugee settlement.  I was a senior officer in the Commonwealth Department of Immigration and Citizenship (under its various names) from 1987 to 1998, having served in Thailand with the aid bureau of the Department of Foreign Affairs and Trade from 1985 to 1987.  I then spent four years, to 2002, as Executive Director of the Survivors of Torture and Trauma Assistance and Rehabilitation Service (S.T.T.A.R.S) in South Australia, before establishing Emu Link.

Since its establishment, I have, through Emulink, been successful in bringing many migrants to Australia under all categories, and also as temporary residents who have subsequently changed status to permanent resident.  I have also been successful in processing cases through review. Emulink Migration Consultancies refers its clients to the Office of the Migration Agents Registration Authority at www.mara.gov.au for any issues concerning service provision.

In 2007, Emulink Migration Services has branched out to establish links in Indonesia, India and Italy.  Our assistant in Indonesia is Ms Serina Rajagukguk, who can be reached on mobile number +62 85220465600 or email sweeteycher@gmail.com. Mr Sanjiv Jhangiani is assisting the agency in India, and is contactable in Mumbai on  +91 9820079023 or sanjivjhangiani@yahoo.com. We are currently in the process of finding local, on-the-ground  representative in Italy.

In that year, I participated in a major tour of Indonesia, covering Jakarta, Surabaya and Denpasar, organised by the Australia Indonesia Business Council (AIBC) and its counterpart organisation, the Indonesia Australia Business Council (IABC).  This tour covered a lot of ground, and enabled useful contacts to be made between Emulink Consultancies and many service organisations seeking migration advice in Indonesia. In the following year, I returned to Indonesia to furher familiarise myself with the language and culturess.  I have also recently travelled to India and Thailand, establishing valuable business links.

Over the past two years,  I have begun to focus on review, and offer my services to any prospective migrant, or any migration agent, who needs help in lodging and pursuing a review application through the Migraion Review Tribunal.  My costs are extremely competitive, as are my results!  My other focus is on business migration, particularly from China and Southeast Asia.  I have Chinese-speaking contacts establishing themselves in China, and am myself conversant with Bahasa Indonesia and Thai. 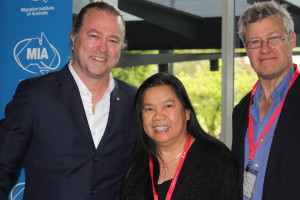